While currently 60% of the world’s population lives on the coastline, the coast continues to attract more people each year. According to UNEP (United Nations Environment Programme), 75% will live on the great coastal zone in the next thirty years. This phenomenon is called heliotropism, which is a voluntary migration towards a better quality of life and a better climate. We can also notice that this migration is due to balneotropism, which means people who choose coastal areas to settle massively for its benefits.

As a result, energy needs on these areas are increasing. In order to meet the demand, some districts have started using seawater as a way to heat and cool all the residential buildings.

Oceans hold a lot of energy and seawater can now be used sustainably to meet the growing energy needs on the shoreline.

Marine geothermal energy uses the calories of seawater to heat and/or cool infrastructures located near the ocean. The sea is a local and available resource and seawater has the potential to provide energy for entire districts to reduce costs and greenhouse gas emissions.

The Principality of Monaco was a pioneer in this field and has now 80 systems on its territory that covers 17% of the total energy. France has been starting to consider this technology for a few years for new constructions and renovations on the coastline.

In France, Marseille was one of the first cities to use this kind of marine energy. Two districts are now provided with heat and air-conditioning thanks to seawater: Euromed 1 and Euromed 2.

On October of 2016, Thassalia, a subsidiary of the Engie Group, implemented a new urban heating network in the Euromed 1 district. This network works using a heat pump and seawater of 20MW for cold and 20MW for heat. Calories are then exchanged with seawater pumped in Marseille’s port.

A year later, the subsidiary of Dalkia (EDF Group), Optimal Solutions was inaugurating “Massileo”, a new district that uses seawater for heating and cooling purposes (air and sanitary water). 500 000 square meters are benefitting from this local and renewable energy in the Euromed 2 district. This method allows up to 75% of energy savings. This project provides an ecological district called Smartseille.

Marseille does not want to stop there and has a new marine geothermal energy project to provide energy for the future district called Les Fabriques.

The heating network in La Seyne-sur-Mer is also working thanks to seawater’s calories. Around 980 apartments are heated and cooled in the district with a heat pump.

The Mediterranean isn’t the only place using this technology; a new district in Cherbourg called La Divette uses seawater and a heat pump to heat 2000 apartments. 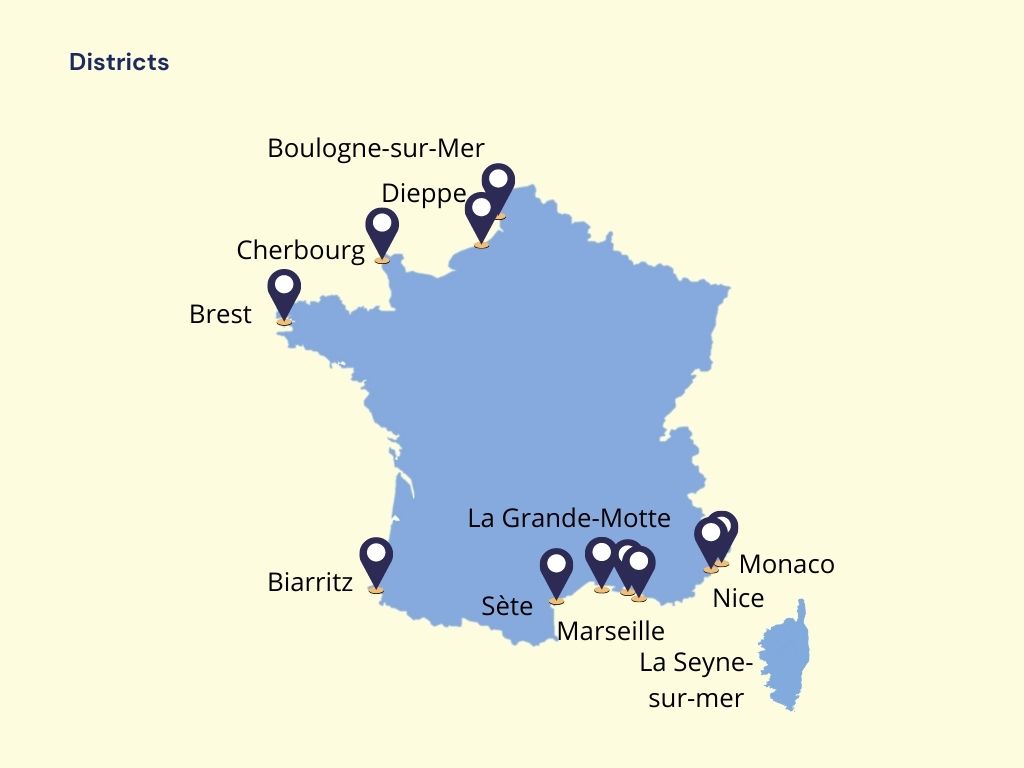 Other projects are said to use the same heating and cooling system soon:

The city of Boulogne-sur-Mer, northern France, is considering providing heat and cold for the Capécure district by using a seawater heat pump.

La Grande Motte also has an ambitious project to be able to heat and cool a network of around 3,100 apartments using seawater.

In Nice, marine geothermal energy will power of future business district of Grand Arenas and the eco-district of Nice Méridia. This project is meant to reduce significant CO2 emissions.

In France, there are more and more eco-districts appearing. An ecological district is a set of collective housing buildings with energy consumption reduced as much as possible. There are estimated 500 eco-districts in the country. Future eco-districts are looking at the potential of a seawater heat pump. For an eco-district on the coast, marine geothermal energy could prove to be the ideal response to meet the energy needs while being ecological and sustainable. The same applies to any infrastructure located near the coast.

In order to make this solution even more ecological and economic, the Enerplage® system makes it possible to get highly filtered seawater thanks to the sand from the beach which is ideal water for the heat pump to function to heat and cool one building or a whole district.